Skip to content
10Jul 2017 by Jonathan Kopp No Comments

Crowdfunding has become a primary source for new watch products and Calvin Jr is not at his first attempt.
Indeed, the brand based in Hong Kong has already achieved two campaigns with great success. (You can discover them here : Velocita and Airspeed.

Today they are back on Kickstarter with a new outstanding timepiece inspired by aircraft.
Before I start to describe the piece I must confess something to you … I’m a fan! I love its design and I really love having it on my wrist. This is, I think, a watch with originality / sportiness / quality and price ratio that is excellent.

So now let’s have a look the watch. The Commander series offer you the possibility to get a statement watch without breaking the bank as you can get it for only 449$. At this price you’ll have a real work of Art on the wrist. 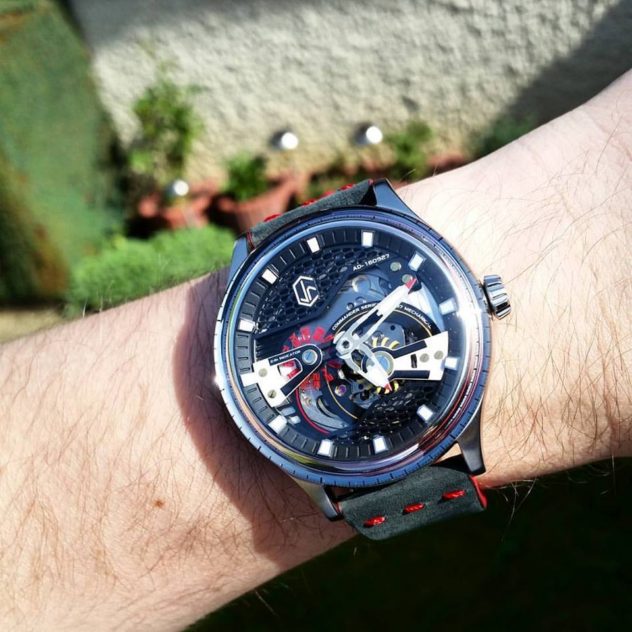 I was already a fan of the Airspeed watch, and here Calvin Jr, still managed to amaze me … From a design point of view it’s a real success. The piece with a diameter of 45 x 16,25mm may seem big for small wrists. But in fact thanks to its very aerodynamic design and its generous curves, the latter fits the wrist just perfectly … and even for small wrists like mine.

The dome shape mineral glass magnifies the whole skeleton dial. When one looks more carefully, one notices that, as well as on the front or the back, CJR puts a band of color (red or blue according to the version), which takes again the same colors as some other details of the dial and the bracelet.

The dial is of course the center of all attention. It’s made with several ultra cool details. The first thing that caught my eyes was of course the seconds’ wheel which has been inspired by plane turbine. It’s really unique and it gives dynamism to the dial.
At 9am there is a 24h indicator. The latter is represented by a transparent subdial on which the hours have been printed. We must admit that this feature is quite interesting, especially if you travel a lot. When traveling between time zones, it is easy to lose track of time, particularly whether it is AM or PM. Here, by showing the hour of day, time never eludes the wearer. 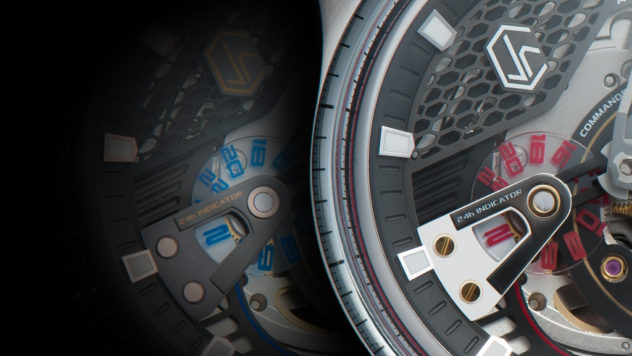 The hours and minutes hands are just awesome… They do not resemble anything else existing. It is, I think, what’s really good with Calvin Jr. Although it’s a small brand which offers watches at low prices, there is no negligence at the design level … And even on the contrary, they take risks.

These skeleton needles have 3 different colors, not including the addition of the luminova (that we also find on the indexes). They contrast perfectly with the rest of the piece, and of course, they stick completely to the basic inspiration. 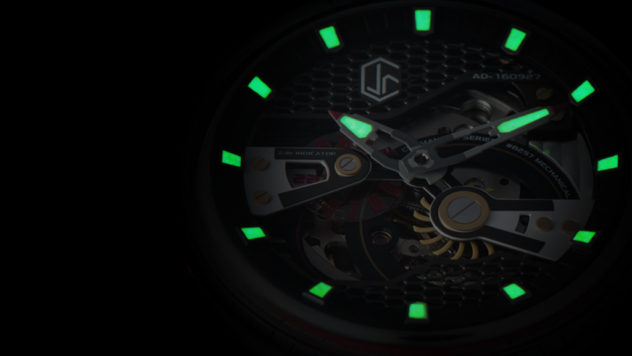 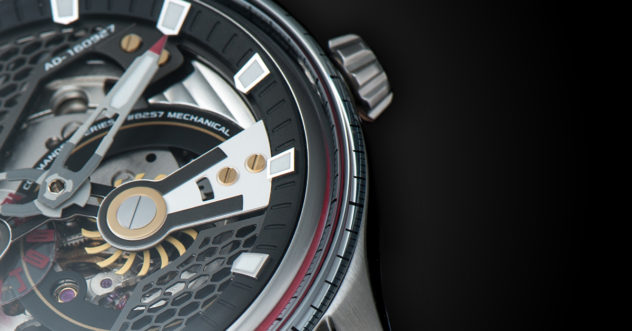 Here the cells of the structure/dial have a hexagonal shape just like the shock absorption honeycomb structures that we can find on some supercars.
Behind it we can see the movement. Calvin Jr decided to use the Miyota 82S7 which has 40 hours of power reserve. This movement, known for its robustness, is also used in the very famous SevenFriday P1B/01 watch.

To finish we have a strong Italian leather strap that has the same color touches of the rest of the watch. This one is finished with a simple pin buckle.

Well, for sure the Commander is going to be a big success. So if you’re interested jump on their Kickstarter campaign. Honestly, it’s a timepiece that’s an absolute must-have for collectors.

CJR has raised more than $150K on Kickstarter with the Airspeed regulator watch. Guess what.. I’m sure they will do the same with this new timepiece.