Skip to content
11Aug 2016 by Martin Green No Comments

Brew Watch Co. has just launched its second watch, the HP-1. With a design inspired by industrial coffee machines, the HP-1 is unlike any other watch out there. It is a big step ahead of the first Brew watch the special blend series, a quartz chronograph, and not only in terms of movement.

Brew Watch Co. is based in New York City, and that shows. The HP-1 has a very urban feel to it, it can express what it is all about with a minimum of details. In previous articles I have stated that minimalism is the most abused term in the watch world. Brew Watch Co. doesn’t use this term, but does know how to apply it. Here no hollow references to the Bauhaus-movement, but a simple design that seems straight forward but is anything but. 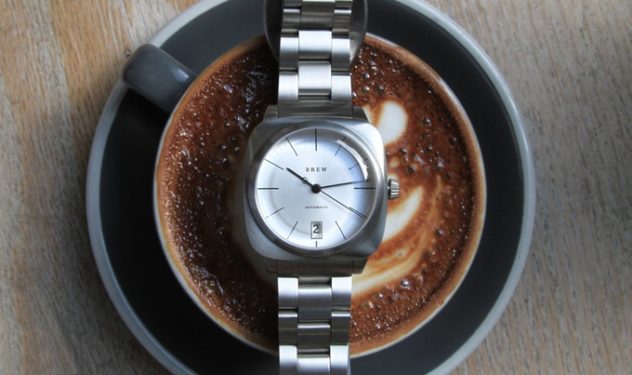 The dial is very straight forward, with just 12 dashes to mark the hours. But when you look closely between the 10 and 1 o’clock, you see minute marks edged in the dial. This is a reference to the “High Pressure” region on industrial gauges. The hands are crafted in the same design as the hour markers, but the seconds hand has a round shaped counter weight. This is once again a reference to the industrial gauges, but it is also a detail that has a visual strong impact, due to the absence of other details. 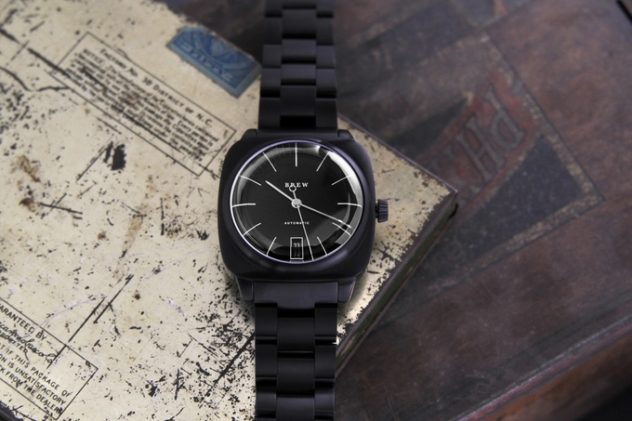 People often think that fewer details make for a less interesting watch, but when you apply fewer details, every detail count, and need to make an impact. With the HP-1 Brew Watch Co. succeeds in this marvelously. Take for example the high dome sapphire crystal they use, who’s play with light and magnifies the features of the dial from certain angles. Combined with the cushion case, the high dome sapphire crystal also gives the watch a vintage feeling, but stays modern enough to not make it retro. 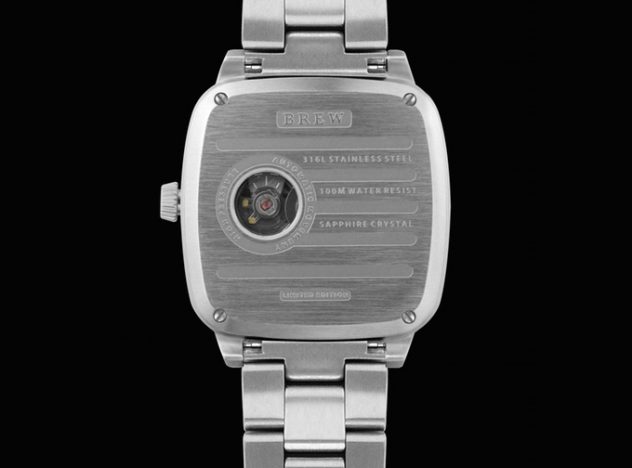 Some people might complain that the 38mm case is too small, I think that it is perfect. Being a cushion case, it wears larger to begin with, and the design asks for some refinement and subtlety. The screwed case-back only reveals the balance wheel and that is a good thing. Brew Watch Co. opted for the automatic Seiko caliber NH35A, an amazing, reliable and precise movement, but as good-looking as the engine of a Prius. So good choice to only show the most interesting part of the movement.

The bracelet amplifies the urban feel of the HP-1, and comes with a nice butterfly clasp. Except on diving watches, most micro-brands don’t go through the trouble to fit their watches with a bracelet, but I am glad that Brew Watch Co. did. It finishes off the watch in a way no strap would. Now all you have to do is see if you prefer the all steel, black pvd, or rose gold pvd version. Yes, Brew Watch Co. makes choosing just as difficult as picking your favorite roast at your local gourmet coffee roaster….

More information can be found at the Brew Watch Co. website or on Kickstarter