Skip to content
16Aug 2016 by Martin Green No Comments

“The Captain Of Her Heart” was a smashing hit for Double, in 1985. It is also exactly the deepest desire of most watch brands to become the captain of your heart. And a watch that might succeed in that is Oliver Jonquet’s Capitaine! 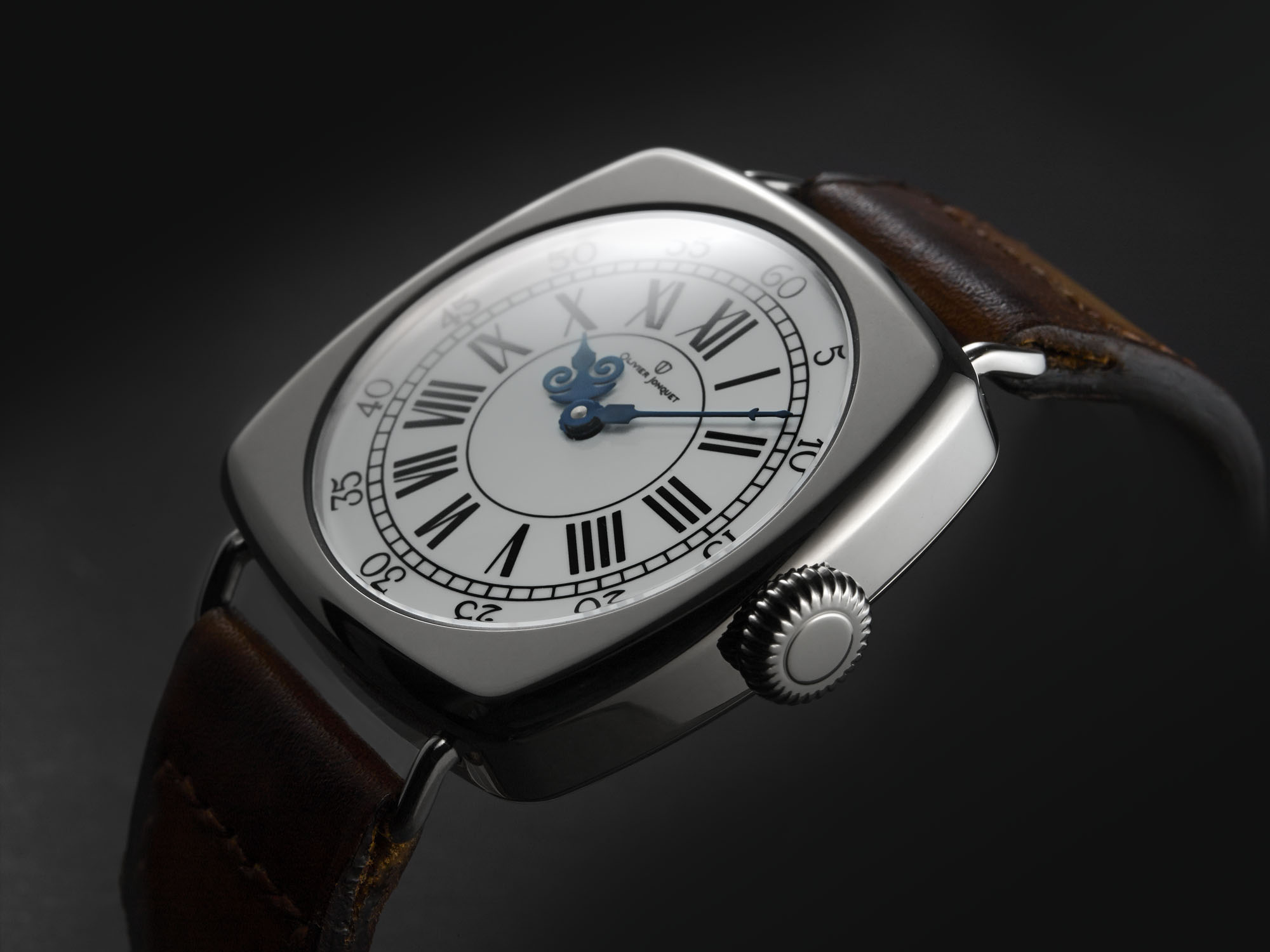 The French brand Oliver Jonquet sounds very regal and old, yet their very first watch, the Elie, was first sold in 2014. Now they introduce the Capitaine, a bigger, bolder and some might say, better version of their first watch. The Capitaine is quite an eyecatcher, also thanks to the generous size of its cushion shaped case. With 43,5 x 43,5 mm you have a lot of real estate to do something with, and fortunately has Jonquet no problem to seize this opportunity! 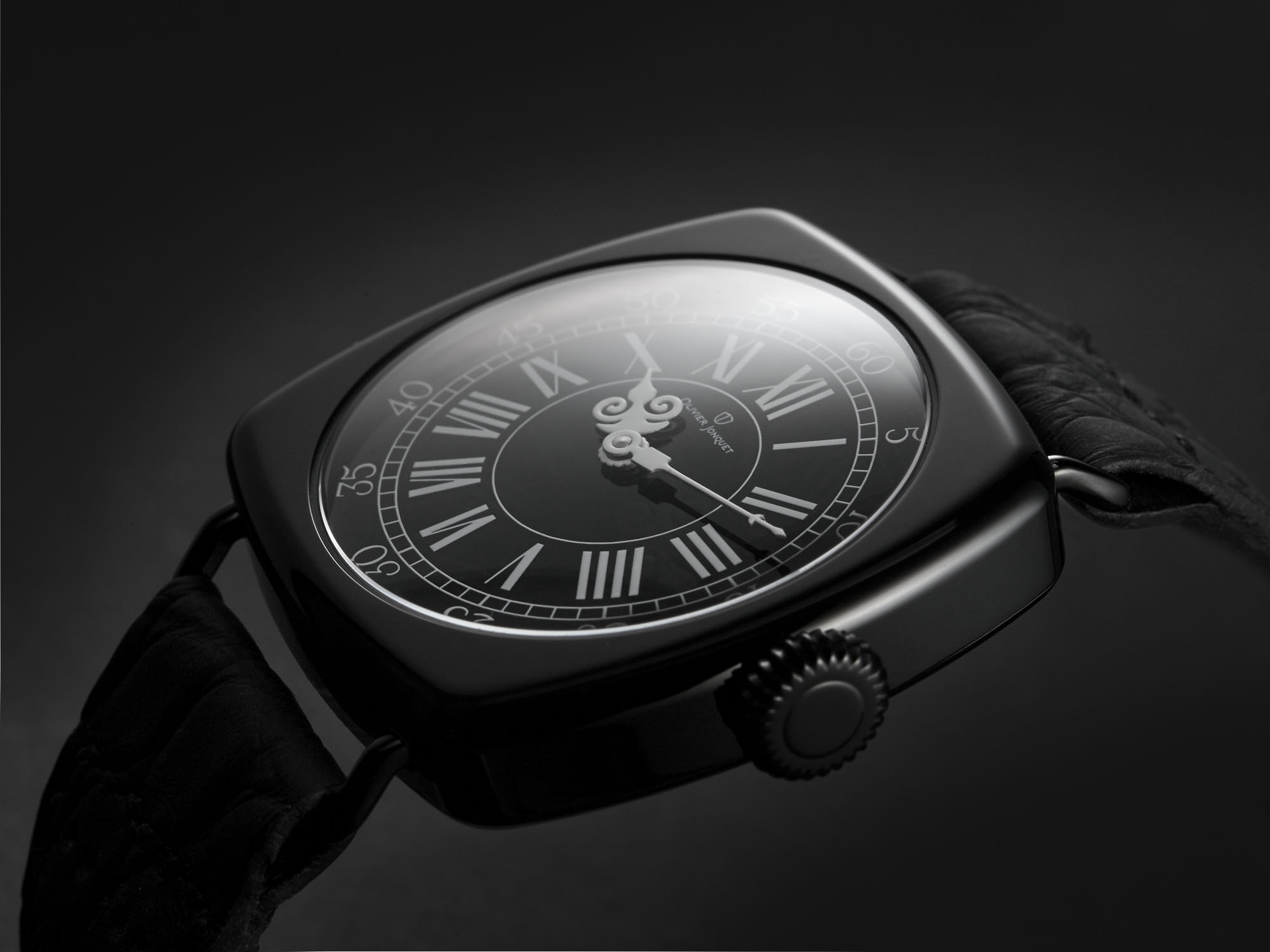 The Capitaine comes in three flavors: two with a white dial, and one black dial version. All are stunning, and feature the perfect blend of Roman numerals, with an outer ring counting the minutes in Arabic numerals. The font of the Arabic numerals is very well chosen and really makes the dial….if it wasn’t for the hands. Jonquet went for a very dramatic and unusual design of the hands, that goes absolutely perfect with the cushion case and the dial. It really sets the watch apart and elevates it above the rest. 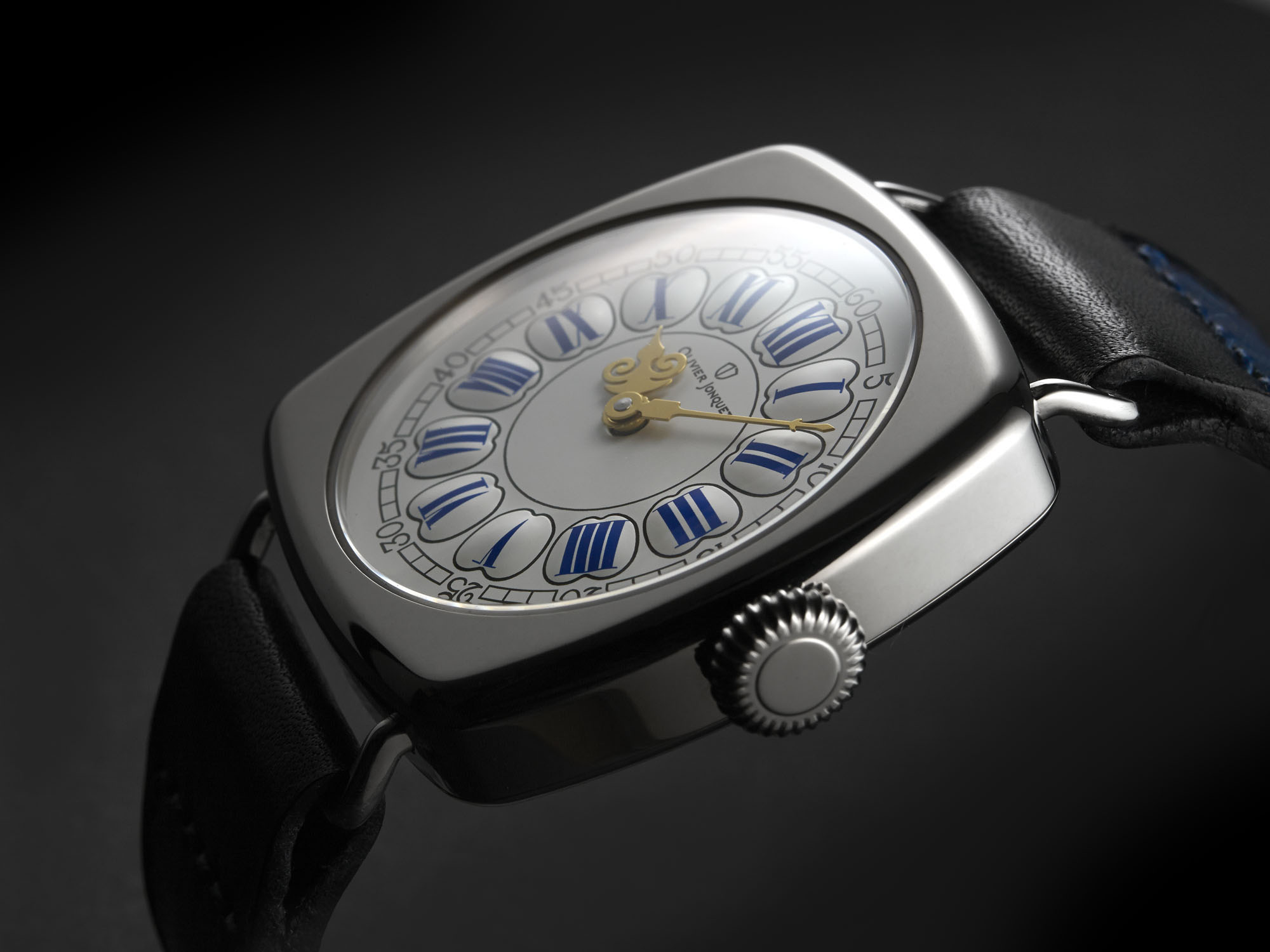 There is also a “Carosse” version, where the dial has the same design as you sometimes can find on these old fashioned clocks, and this one is combined with golden hand. The result is even more dramatic than the regular white dialed version. 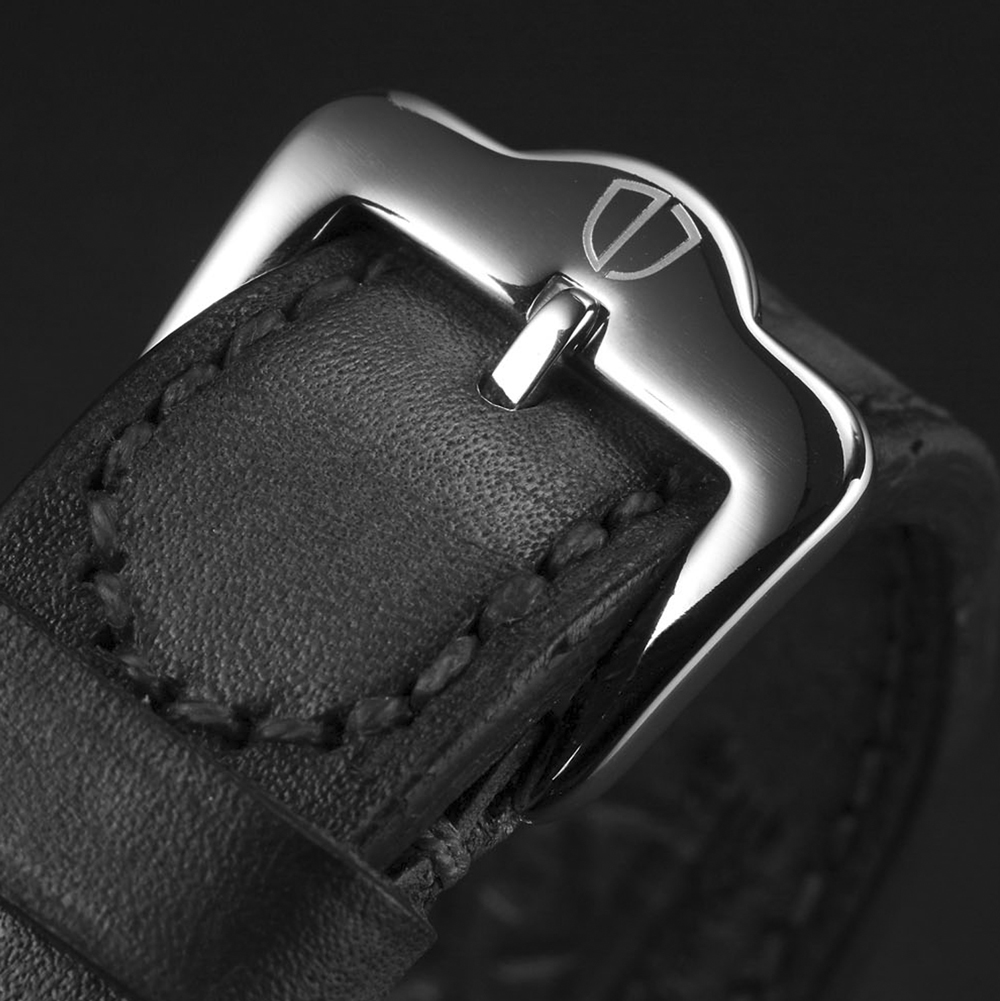 With such eye-catching dials, you would almost forget the case! Jonquet really mastered the cushion case, which is well rounded, perfectly finished and has charming wire lugs on which a custom made strap is attached. Praise for this, because most brands always seem to forget to fit their watches with a really good strap, while this has such an incredible impact on the wearing comfort as well as the looks. But back to the case, the black dialed version of the Capitaine is fitted in a PVD coated case. Combined with the white hands, it results in a bit of a sinister watch, one you would expect Cardinal Armand Richelieu to wear would there have been watches during his time. The white dialed version, features the same unique hands yet then blued, and encased in a stainless steel case. The PVD and Carosse version will set you back € 1.991,67 , the steel one € 1.825,- (both prices are without VAT) 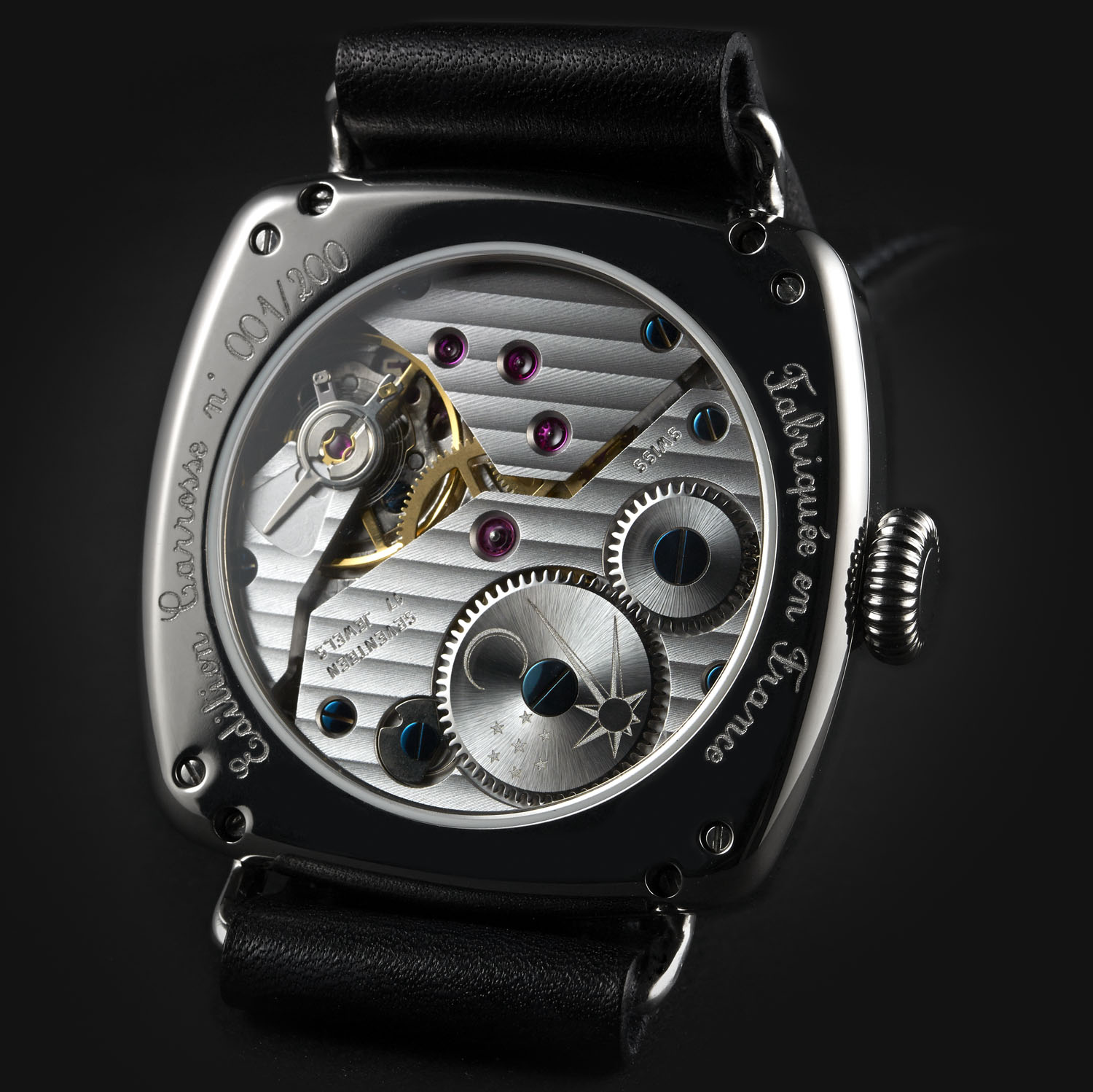 As for the movement, the Capitaine is powered by Unitas/ETA caliber 6498-1. Jonquet uses the version with the most elaborate decoration, and with a customized ratchet wheel, but it doesn’t feel as if this is enough. Done watches, which cost about 1/3 the price of the Capitaine has a more elaborated decorated movement. Also, with the rise of Chinese made clones of this movement, which often have the same decorations, the desirability of it has evaporated a bit.

That being said, the Capitaine still has enough to love, and its strong character makes it that I am quite certain that it will indeed seize the command of enough hearts to have its limited edition sold out in a heart beat.

More information on the Oliver Jonquet Capitaine can be found here