Did you know that Bulova was on the Moon ?… On August 2, 1971, Apollo 15 made lunar history and with it a Bulova moon pilot chronograph. Customized for lunar conditions, the watch could precisely track time and ensure that no one ran out of oxygen, water or battery power in the portable life-support-system backpack.

Dave Scott’s Bulova chronograph which reached the moon was sold in 2015 on auction for 1625000 USD… Oh yeah Dave Scott was the spacecraft commander of Apollo 15. 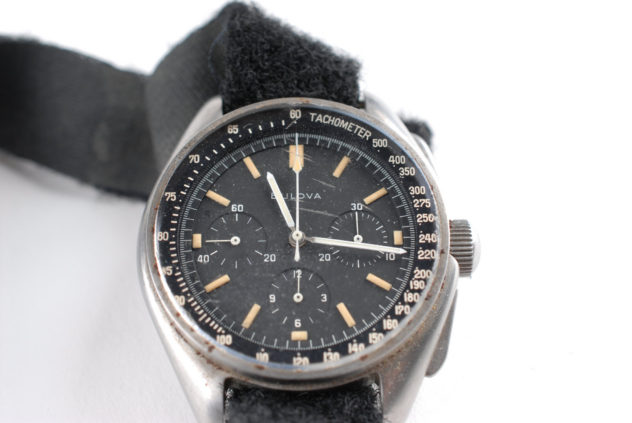 And now you will say :”John why talking about million Dollars watch while Watchisthis is focused on watches priced under 2500$?”.

My answer is simple : Affordable “Re-edition”.

Nice thing is that Bulova reissued the Moonwatch in a modern version at the very affordable price of 550 USD: Bulova Moon watch replicates the original timepiece, updated with their high-performance quartz movement. The « Precisionist » movement has a frequency of 262 kHz for unparalleled accuracy, continuing a history of precision timing – But we will come back later on it.

This modern version has a 45mm 316L surgical-grade stainless steel case with sanblasted matt finishing. The design of the case took, of course, its inspiration on the 70’s Moonwatch, with ergonomic pushers on the side and curved lugs.

The crown has the same matt finish than the case and the chrono pushers are polished in order to create a nice contrast. Sure the shape of the chrono-pushers are a bit unusual, but they are beautiful and increase the watch appeal (in my opinion).

The watch comes with a set of two interchangeable straps: a textured black leather and a black nylon with a nubuck leather patch that commemorates the date of the mission (DOM) as 08021971. 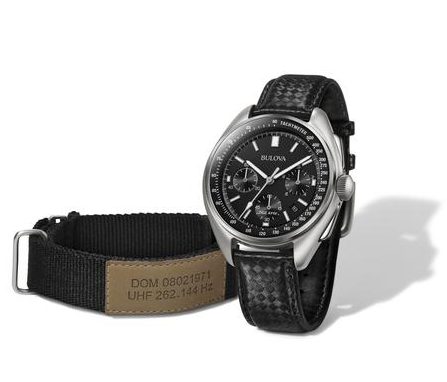 The black dial has super-luminous hands and markers, tachymeter inner bezel, date window at 4:50 o’clock, and three subdials for the chronograph function. The subdial configuration echoes the original, but they are rearranged and repurposed. In the original you had : Running second at 9 o’clock, 12-hour chrono at 6, and 30-minute chrono at 3 o’clock. Here, the 9:00 dial counts 60 minutes, running second is at the bottom, and the right at 3 o’clock there is the 1/10 second dial.

The whole is completed with a date display that we can see between 4 and 5.
The dial layout is classic for a chronograph and together with the case reminds us the vintage chronograph – quite normal since its origin comes from a 70’s watch. 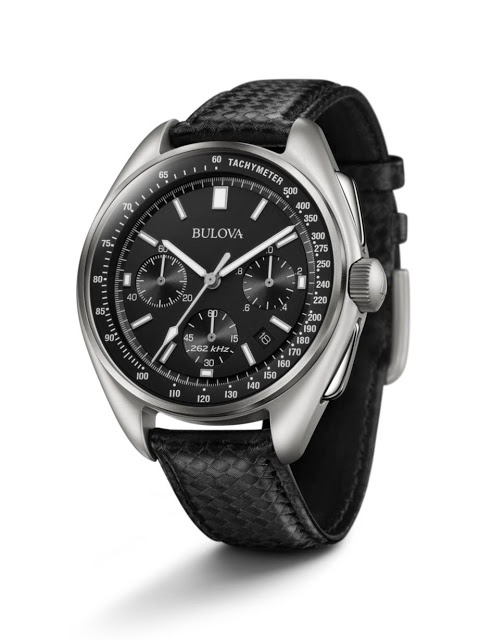 The caliber is an in-house “High-Performance” 262 kHz quartz chronograph movement from the “UHF” (ultra-high frequency) movements family and Bulova said that it is the most accurate quartz in the world.

Bulova has added a third prong to a standard two prong quartz crystal creating a torsional resonator. This innovation results in eight times the vibration frequency of a traditional quartz watch resulting in the most accurate watch with a continuously sweeping second hand. 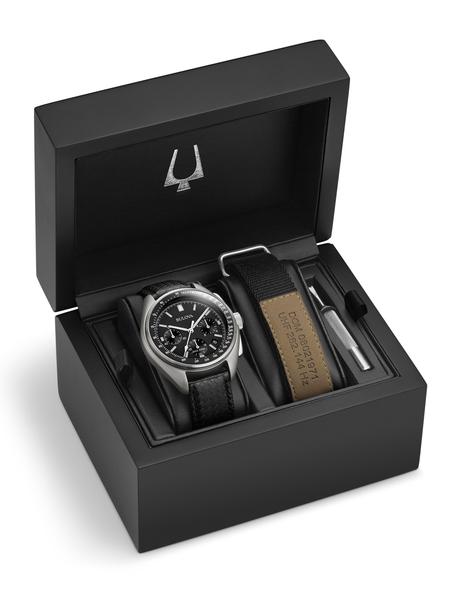 The technology is accurate to 10 seconds per year as compared to most other quartz watches, which are accurate to fifteen seconds per month.
Let me say that this is really cool because as we all know, the importance of accurate time measurement cannot be understated when it comes to a watch.

There is also a version with a steel bracelet priced at 675 USD but my favourite will remain the leather strap. 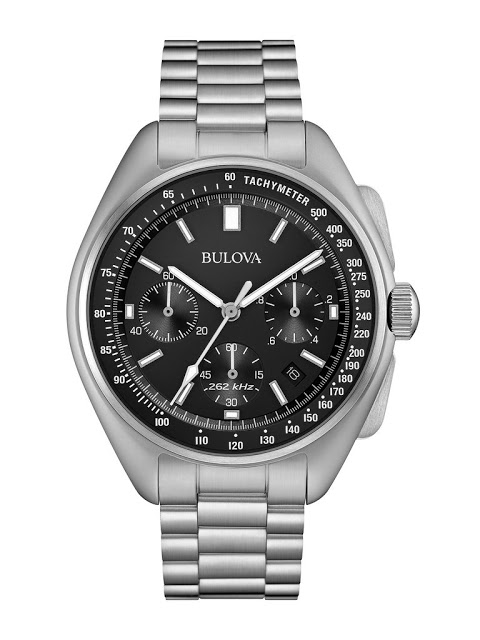 The watch comes in a nice Giftbox that includes a Certificate of Authenticity.

Well, I must say that it’s an aesthetically pleasing reissue that has everything I like in a watch. The movement used is really great even if a mechanical movement would have been really cool.
A wise choice that will delight collectors as well as watch enthusiasts of pieces that have been in space.

2 thoughts on “The Moon Watch by Bulova”