Skip to content
29Apr 2016 by Jonathan Kopp No Comments

How to get a place in an industry that is already quite busy? Rogier van de Ree is a watch enthusiast who has a furious love for design. His passion drove him to create in 2015 his own watch brand : Pheidippides Watches.

The name of the brand comes from a Greek messenger who ran from Marathon to Athens to announce the Greek victory over the Persians. Victory, that’s also what we hope Pheidippides Watches achieves, as they make their grand entry into the world of watches by launching the Porthole timepiece.

The brand based in the Netherlands started in 2015 with creativity as a lead motiv. For this new brand, Rogier van de Ree has designed three timepieces: The Inkpot, The Porthole and The Hourglass. The Inkpot was his first design and the first working prototype was ready in December 2015. Prototypes of The Porthole were finished in March this year and launched on Kickstarter (and now on Indiegogo) to raise funds in order to produce a limited series of 300 timepieces, and the development of The Hourglass is in progress. 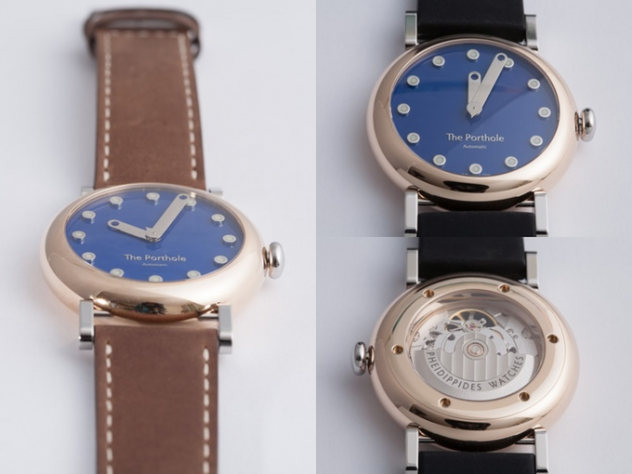 « Designing watches with a thoughtful twist is what gives me joy. I am driven by the search for that little or big extra that sets my design apart » said Rogier.

Indeed, when looking at the Porthole we can see some nice details that set this piece apart from the crowd. The Porthole was developed by Rogier because he wanted to create something with a nautical theme. He decided to use bronze as material for the 42 mm round case, because it’s a softer metal which suffers more from daily use than hardened steel, and because of that it has a more lively color and develops a beautiful patina over the years. Cool thing is that with time no watch will look the same. Note that this material is associated with the nautical world since centuries… So the choice is perfect for this piece.

The case is spherical in more than one way. It has a semi-circular side that flows seamlessly into the curve of the glass, giving it a smooth feel. The watch slides easily under the cuff of your shirt thanks to its thickness of 12.3mm. 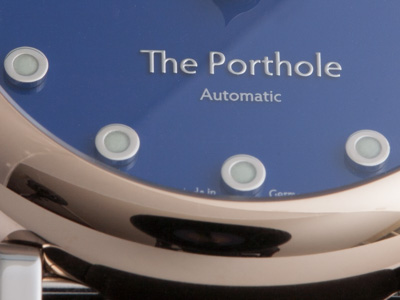 Also Rogier decided to work with a German workshop familiar with making jewelry to do the technical development and production of the custom made cases. When you know how Germans work you can be sure that the case will be made perfectly.

Another nice feature is the glossy blue lacquered dial. Indeed, the Porthole watch offers a simple yet unique way of telling the time. The 2.4mm hour markers resemble buoys floating on the sea surface, with dots of Superluminova lighting in the dark. The wide polished steel hour and minute hands have small holes matching perfectly the dimensions of the indexes. So when the minute hand moves over a marker it will cover it precisely and the Superluminova will glow through the matching hole.

The hands have also Superluminova on the back making the hands visible at night in their own shadow. The seconds hand stands in the center, and looks like a discreet droplet of water.

The sapphire caseback offers a view on the automatic movement which is equipped with a customized rotor. The Swiss made mechanical movement is an STP5-15 automatic calibre produced by Swiss Technology Production (a Fossil group company) which celebrates this year their 10 years of existence. This one offers a power reserve of 44 hours and beats at a frequency of 28’800 alt/h – 4 Hz. The movement looks like an “evolution” of the ETA 2824 which has approximately the same features but a power reserve of 38h.

Finally, the moveable lugs made of polished stainless steel to give a nice contrast to the bronze case and matches the polished hands. The 7 mm crown resembles the shape of case. The watch and buckle are held together by a brown genuine leather strap. As an alternative you can choose a black silicone strap, when you are thinking of taking your Porthole actually into the water.

Now if you’re interested in this pretty cool timepiece you can find it on Kickstarter by following this link : Kickstarter

“Every idea is born in a flash. The brainwave only takes a blink of an eye and it takes another second or so for the idea to fully manifest itself in your brain”. … Now let’s make the idea of Rogier van de Ree be a reality on your wrist.